WHY JOIN THE AUDITION?

The SILENT MANGA AUDITION® (SMA) isn’t just a manga competition, it’s a gateway to your potential Japanese manga debut. By winning high awards in the contest, you will be invited to join the SMA MasterClass where our dedicated team of editors will help improve your abilities for a potential debut through a series of exclusive opportunities.

1.1 The “LANGUAGE” of Silent Manga

A Silent Manga is a visual narrative told without dialogue, that relies entirely on illustration alone. You may, however, make use of onomatopoeia by incorporating SFX into your art.

We welcome all emotions – happiness, sadness, and everything in-between.
Like a good chef, the mixing of opposing flavors can sometimes produce the best results!

The entries will be judged mainly on “the creator’s ability to direct an effective narrative through an entertaining story.” As a creator, your story should be able to ignite your reader’s imagination!

The SMA Judges assess each entry’s  “message and how it makes the reader feel within a short, limited number of pages.”  There are no limitations to what you can draw, as long as it’s an original creation that perfectly captures the theme.

The page count for a single SMA entry is 17 pages or less. (The page count may change depending on the round so please be sure to always check the current round announcement page). Entries should be TRIMMED at the trim lines before uploading to the Entry System.

3. TIPS AND ADVICE FOR YOUR SILENT MANGA

3.3 To take into consideration

We recommend starting your manga as A SINGLE PAGE on the left side of the spread.

Your manga should be drawn from right-to-left (Japanese standard). 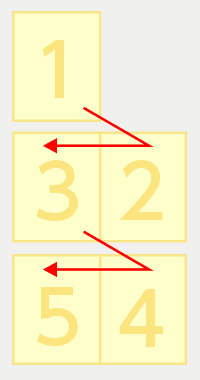 Pages MUST BE uploaded as “1 page / 1 image”. For “double page spreads,” please upload each page as “2 separate image files.”

If the file name is not correct, it may be displayed in the wrong order after uploading.

*NOTE: Be sure to omit the first zero when you reach double figures.

Images will be displayed on the web exactly as you upload them, so please be careful about gutter, trim marks, etc.

5. PREPARATION OF YOUR WORK INFORMATION

The following information is required when you upload your entry on our web system.

When your entry is published on our website at the time of the event results announcement.

This information is necessary at the registration stage in the event of winning an award. All information will be treated with the strictest privacy. You may add a pen name later by filling in the field “Nickname” and then selecting that pen name in the “Display name publicly as” option.

The deadline for each round is listed on the current round announcement page.

*However, we will consider delays due to internet connectivity issues, etc. In this case, the SMA Editorial Department will approve your entries, so please do not panic even after the deadline.


*NOTE: We HIGHLY recommend uploading your entry via a computer, not smartphone or tablet. Our entry system does not work well with entries being uploaded from smartphones.

In the side menu, click “DASHBOARD”. Initially, your entry will have “1. Awaiting verification” status. The SMA Editorial Department will confirm each new entry, so please allow 5-10 days for this to happen. (You will receive an email when this has occurred).

Please ensure that your entry is displayed correctly in the viewer. If you experience any problems, please use the “Contact SMA Editorial Dept.” box to send a message. 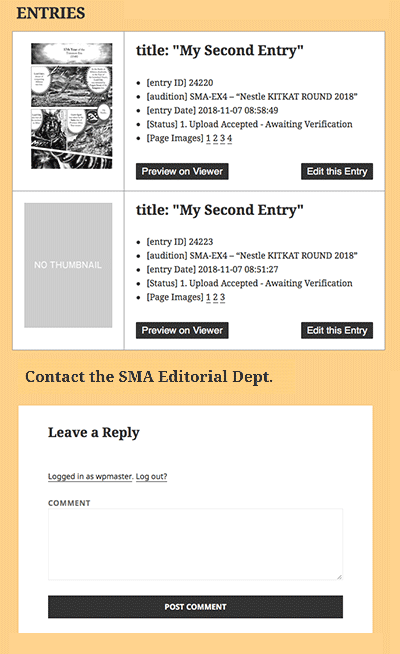 SMA winners will be contacted via email in one to two weeks after the results are announced. The SMA Editorial Dept. will then guide all of the winners through the process of receiving their prizes!